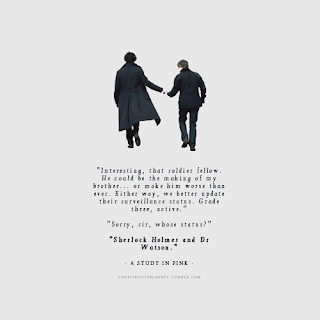 You can't swing a cat these days (turn of phrase, just a turn of phrase, folks) without smacking into another rendition of the great detective's life.  Movies, the BBC, and now CBS (although the BBC is far superior to everything out there, sorry, but it's true) have all tried their hands at Sherlock Holmes.  Even before this latest round, 221B's most famous resident has been portrayed on the page and on screen more than any other fictional character.

Regardless of the incarnation, I am a ardent fan -- a Sherlockian, if you will.  The brain of the man, his deductive skills, his robot like chill and suave exterior, are all thrilling to read or watch.  But it's the heart of the enigmatic sleuth that draws me in.  A heart that even Watson doubted the existence of for much of the stories.

For those of you not in the know, there exists a huge fanbase in the blogosphere clamoring for more than a bromance between these two men.  A forest of fics have popped up detailing what happens once those 17 steps have been climbed.  Why had this occurred?  Perhaps it's the current upsurge of erotica. There exists, my right hand to God, one publisher who focuses exclusively on sexing up the classics --- Clandestine Classics or some such other title.  Jane Eyre with whips and chains, Emma with a dog collar -- who knows?  The lustier, trashier, edgier, more pornographic the better -- right?

As if without sex, a relationship is somehow not complete.

I'm confused.  First I think the classics are fine without crotchless panties.  And as far as Sherlock goes, there is a world of intensity to wallow in without condoms and lube.  What isn't compelling about a lifelong, utterly devoted friendship --- one of the greatest in literary history -- the bromance of all bromances if you will?  These men would die for each other, they basically live as a happily married couple with their domestics and quiet contemplations and laughter.  They complete each other as no one else can.  Isn't that more profound than a good shag?  Not that I'm against a good shag, mind you.

Now, I'm a strong supporter of same sex equality in all things -- especially marriage.  And I have read and enjoyed my share of M/M fiction.  But before we even contemplate who tops whom in any of these stories, can we talk about devotion.  I think it's a forgotten word nowadays.  It's quiet and constant; it doesn't throb or thrust or moan loudly.  Devotion transcends time and age and the battles waged just to get through life.  There is a charge to it that can fuel passion if passion is there, yet it can fuel courage and nobility and joy as well.  But most of the time it stays silent by.

This devotion is what affects me most about the Sherlock stories.  Holmes and Watson are each incredibly broken in their own way.  One is an unappreciated and often spurned genius, the other is an emotionally and physically crippled veteran.  The dynamic of those men healing each other -- of coming to need each other -- is staggering.  Do I need to see them hop in the sack --- I'm not against it, but it's not in their nature to do so.  If I were to read a series that had those elements with a different set of men, would I be intrigued -- of course -- but I don't think Sir Arthur Conan Doyle ever envisioned handcuffs lined in mink.  Still I would challenge anymore to watch the end of the last episode of this season's Sherlock and not feel it deep in your gut.

In that way, Arthur Conan Doyle did, I believe, craft a love story.  One in which two halves are made whole.  The making of a great man by the devotion of another.
Posted by Sarah Glover at 11:20 AM